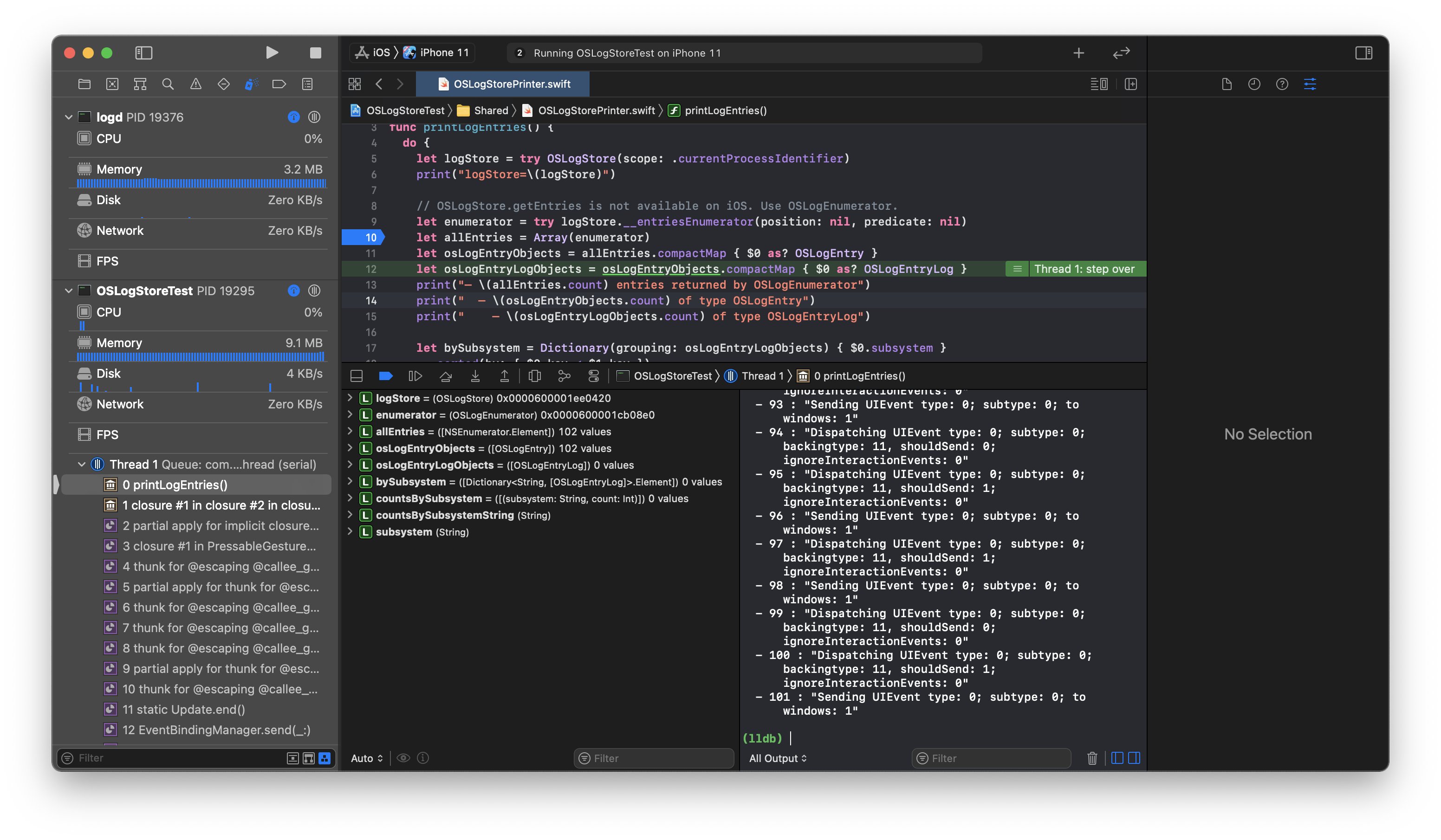 With iOS 14, Apple improved the built-in logging framework and added many missing pieces. Is OSLog now something that can finally be used?

*Surprisingly, Apple removed OSLogStore from iOS with the GM release. Jump to the changes made in iOS 14 GM.

Every developer uses some form of logging, be it NSLog in Objective-C or print in Swift. These helpers are convenient, but they don’t scale — there’s no concept to classify messages.

Apple introduced os_log with iOS 10 and macOS 10.12 in an attempt to provide a better universal logging system.1 It supersedes the ageing Apple System Logger (ASL) and comes with features expected from a modern logging system:

Instead of calling os_log, you can now use the new Logger struct in Swift — at least if you have the luxury of exclusively supporting iOS 14 already:

This innocent-looking code uses a bunch of new tricks! First off, the new string interpolation feature of Swift 5 is used to make it easy to customize the privacy of data.

Second, Apple modified the Swift compiler to allow compile-time constant expressions to evaluate the string at compile time. This ensures that logging is extremely fast. The technology behind it is fascinating, and it seems it was worth the wait.2 For more example code, see Apple’s excellent documentation on Generating Log Messages from Your Code.

If you still need to use iOS 13 or are curious how things worked back in the day, here’s how calling os_log works. Naively, you might try following approach:

The compiler complains right away:

os_log requires the use of Objective-C style format strings for performance and security reasons.3 At the same time, Apple also strongly recommends to avoid wrapping os_log. So there’s really no way around using the following syntax:

What’s the Problem with Wrapping OSLog?

OSLog is designed to accept static strings, in order to be fast and to correctly separate between dynamic data (private) and static data (public). Most wrappers simply forward messages via os_log("%{public}@"..., which makes all strings dynamic and public, removing most of the benefits of OSLog.

Apple maintains a separate SwiftLog logging framework for the Swift on Server ecosystem.4 The framework supports plugins, and there’s a third-party swift-log-oslog plugin, which forwards logs to the os_log machinery. Apple does link to it but also explicitly warns about usage:

we recommend using os_log directly as decribed here. Using os_log through swift-log using this backend will be less efficient and will also prevent specifying the privacy of the message. The backend always uses %{public}@ as the format string and eagerly converts all string interpolations to strings. This has two drawbacks: 1. the static components of the string interpolation would be eagerly copied by the unified logging system, which will result in loss of performance. 2. It makes all messages public, which changes the default privacy policy of os_log, and doesn’t allow specifying fine-grained privacy of sections of the message. In a separate on-going work, Swift APIs for os_log are being improved and made to align closely with swift-log APIs. References: Unifying Logging Levels, Making os_log accept string interpolations using compile-time interpretation.

There are also surprising bugs like doubles that aren’t logged correctly, which can be very hard to debug.

Log files are useful whenever users report a bug or a crash is being sent. Most logging frameworks therefore include a rolling file logger, which makes it easy to access logs on demand.

Apple’s solution to accessing logs is either collecting a sysdiagnose or calling log collect --device on a terminal. The latter possibly requires filtering the output via the --start or --last limits and then sending the output manually.

This might work if your audience is macOS developers, but if you’re targeting regular users, it’s much harder to make them follow a tutorial and then explain how to send a multiple-hundred-megabyte sysdiagnose. Furthermore, this will only work if your user runs a recent version of macOS.

In all practicality, this resulted in basically no app using os_log directly, which completely defeats the point. The most used logging frameworks to date seem to be SwiftyBeaver and CocoaLumberjack.

The inability to access logs has been a point of personal frustration; there are multiple forum entries where people are just baffled that this doesn’t exist. I’ve brought it up every year in the WWDC labs except for in 2020. The usual answer is “Apple cares about privacy, so accessing logs is a no-go,” but the alternative is that people use other logging frameworks that have no privacy-preserving features built in.

At PSPDFKit, we tried switching to os_log but hit the same issues: Our customers depend on a custom log handler that integrates our log messages with their infrastructure. To date, this can only be done with OSLog using SPI.5

With OSLogStore, Apple added an API to access the log archive programmatically. It allows accessing OSLogEntryLog, which contains all the log information you’ll possibly ever need.

The new store access is available for all platform versions of 2020. It’s the missing piece in the os_log story that finally will get us the best of both worlds. Let’s look at how this works:

The code is fairly straightforward; however, the above version has various issues, e.g. it works on macOS but doesn’t work on iOS.

Apple forgot to add the Swift overlay shims on iOS, so we need to use some tricks to access the Objective-C enumerator (FB8518476):

Since the non-sugared version also works on macOS, it’s not necessary to do an if/else dance at all. However, this is a good pattern to document how it should work, assuming the bug gets fixed before the GM.

The next issue is that the entries enumerator has a built-in way of filtering via the predicate. However, this doesn’t seem to work (FB8518539):

Credit for the syntax goes to Ole Begemann, who started investigating OSLogStore early on and maintains an OSLogStoreTest sample project.

While it’s fairly easy to work around the first two bugs, the third one is a real showstopper. While accessing the log store works great on macOS AppKit and macOS Catalyst, it fails with an entitlement error on iOS:

Why this wouldn’t work isn’t documented, and neither is what entitlement is required. There’s anecdotal evidence on Twitter that Apple’s intent is to allow this on iOS, however, we’re slowly nearing the end of Apple’s beta cycle and there hasn’t been an official announcement or a fix.

If you feel strongly about this, please also report a radar and engage in the discussion on Apple’s Developer Forum.

How does OSLogStore access logs in the first place? The store is part of the OSLog framework, which includes a small XPC service. At initialization time, the store opens a synchronous XPC request to com.apple.OSLogService, the service included in the framework.

OSLogService ensures logs are filtered for the current process and then accesses OSLogEventStore. OSLogEventStore is implemented in the private LoggingSupport.framework. Here, you can see it connects to logd and also captures the failure condition, which ultimately produces the entitlement error.

If we keep digging and also take a look at logd, we find references to various private entitlements:

The admin one is required for accessing the log store. If we attach to both our app and logd, we can modify the flow at runtime to trick it into believing the entitlement is there, and voila, logging works on iOS!

Was able to get it to work in Simulator by attaching to simulator’s logd, and skip the entitlement check😝 pic.twitter.com/dacAeexQuV

Full credit goes to Khaos Tian, who took the time to figure out the details. Attaching LLDB to logd requires SIP to be disabled, since logd is hardened and doesn’t include the get-task-allow debug entitlement.

It’s often desirable to stream log messages as they come in. This is a feature of many popular analytics and logging frameworks. Of course, OSLog also needs this feature.

LLDB is doing exactly that; it listens to OSLog messages and prints the streams as they’re created. Thankfully, LLDB is open source, so we can look at DarwinLogCollector.cpp, which implements this feature.6

The SPI we need is in ActivityStreamSPI.h, which is part of LLDB. (It contains various structs which cannot be redefined in Swift; this file needs to be plain C.) The main functions that are important to us are:

Given these functions, we can write a Swift7 class that accesses the streaming log. You can see a reference implementation in my gist of OSLogStream.swift. While this works, SPI is still a private API and you shouldn’t ship this in the App Store (FB8519418).

The complete sample project is on GitHub.

OSLog is an extremely awesome API and all the pieces are there — they’re just currently locked away behind private APIs, entitlements, and some bugs. It remains exciting to see if Apple will fix the various issues in OSLogStore before the GM. Or does it work as intended?

Did I miss something? Hit me up on Twitter or open a pull request to help with typos. Thanks! 🙏

Apple changed the header documentation for OSLogStore to explain which certificate is needed (com.apple.logging.local-store):

However, running my example on iOS now fails completely because the storeWithScope:error: initializer is completely missing:

If we use the runtime to look at what’s there instead, we can verify that it’s gone. Interestingly enough, the “unavailable” localStore initializer exists on iOS:

When we use some header trickery to call this initializer, we get the following error:

The Swift shims for enumeration are still missing. Given that this is likely the last beta before the GM, it doesn’t look like OSLogStore will be functional.

Accessing the log store still works on Catalyst, however I only did a quick run, as running Catalyst apps is broken in the current beta.

This is a surprising move and really sad. There’s still hope that this API might come back with iOS 14.1 beta and that it was simply removed due to it not working and time restrictions, but as there’s no official communication around it, it’s impossible to say.

If you think this API is important, and that the absence of it results in things being slower and less secure for everyone, please make yourself heard and submit feedback.

Even worse: Apple forgot a definition in the late-removal, so importing OSLog now fails completely and just produces an error “‘OSLogEnumeratorOptions’ is unavailable: not available on iOS” with Xcode 12 GM. This has been fixed in Xcode 12.2b1.

Apple really messed this one up. OSLog can't be used from Swift because they late-removed API that's referenced in the header? Importing OSLog alone breaks compiling.

Update thanks to Kay Butter: This can be fixed via importing os.log instead of OSLog.

Apple peeps: I reported this feature request via FB8704637.

While SwiftUI is still being cooked hot, it’s already really useful and can replace many parts of your app. And with UIHostingController, it can easily be mixed with existing UIKit code. With iOS...